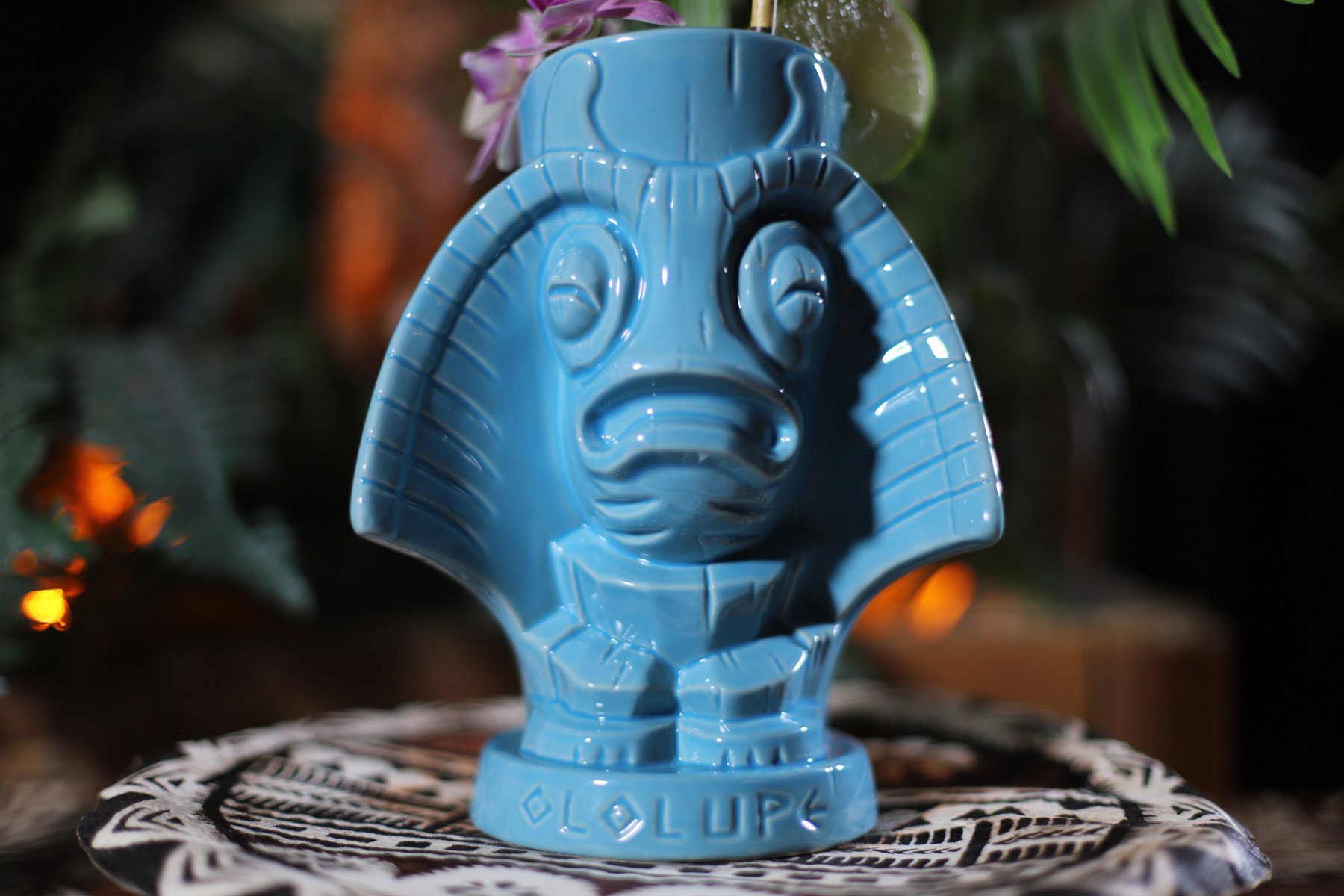 When I decided to relaunch Wondrous Arts and create Moku Huna as a brand specifically dedicated to creating products for fans of tiki culture, I wanted our first product to be special. There were three things that were important to me: First was that the mug be based on an actual aspect of one of the Pacific cultures. Second was that I wanted it to be a new, unique design. Finally, the third thing was that I wanted the color to be something a little different.

I was intrigued by something I read in a book about Hawaiian mythology, about a lesser known god called Ololupe (and known by a couple other names). What caught my attention was that he took the form of a ray or a kite, and that the legend described him acting almost as both a prosecutor of bad deeds as well as a protector of those who were pure of heart.

I reached out to Dave Cohen, aka Squid, as he had done the sculpts for the 40th Anniversary of Pink Panther by SHAG tiki mugs and bowl that I released years ago.

He quickly got a great design together based on what I was trying to achieve, design-wise, for the product, but I wanted it to be a bit less “traditional tiki” and a little bit more “animalistic” because of the specific visual elements that I had read about.

Of course he turned it right around and it was perfect! I love his design for this so much and was beyond excited to get a prototype made so that I could get the mugs into production.

Since it had been so many years since I had the Pink Panther mugs made, I had to start all over in terms of production, so I actually contracted with three separate ceramics companies to put together prototypes. (at some point in the future, I’ll share images of the prototypes from the other factories, which weren’t quite right, but are sitting on a cabinet staring at me here in my office!)

Because of Ololupe’s design, specifically taking the form of a stingray, my desire to do something fun with color was a pretty easy decision. I knew that some type of blue would be a great color, not only to show off the details of Squid’s excellent design, but also to add some cool tones when added to a tiki mug collection that has a lot of browns and other earthy colors.

I won’t bore you with all the mundane intricacies of production, but one of the things that was interesting was that all three of the ceramics companies I had prototype the Ololupe mug asked for my preferred Pantone color for the glaze, and despite giving them all the same info, they all came back very different.

Finally, there’s a sort of funny (not so funny) story about the mugs getting to my distribution warehouse. Of course I was anticipating their arrival quite a bit since I wanted to see the production versions (which are almost always different from the prototypes), and because I was anxious to let people know about them and get them to market.

What I didn’t expect was for my friend (who owns the warehouse) to call me to tell me the truck had caught on fire on the way there!

They think it might have been an issue with the brakes, but in any case, the fire department ripped a hole in the roof of the semi trailer and stuck hoses in to put out the fire. Of course everything was insured, but I was so upset that I’d probably have to wait another 3-4 months to get the insurance money, get the mugs produced again and have them shipped again.

Amazingly, the Ololupe mugs were the first thing packed onto the truck, and the fire was at the other end. Once the insurance companies got through figuring out what was what, my friend contacted me to let me know that the fire didn’t affect the front of the trailer at all. The mugs not only didn’t get damaged, but even the plastic wrapped around the cases of them was completely intact! Talk about a lucky break!

So after a pretty long period of getting started up again and a LOT of good luck on the way, I’m so excited to be able to finally bring Ololupe to market!

When you visit the Moku Huna website, you’ll notice that we give a portion of all sales (not profits) to JDRF aka the Juvenile Diabetes Research Foundation. Five percent (5%) of all regular edition sales and fifty percent (50%) of Special Edition sales will go to JDRF, quarterly.

For the Ololupe Special Edition, limited to just 100 pieces for sale, we did a really beautiful matte glaze with a speckle effect that I’m particularly crazy about. I love the look of this glaze and hope to do more with it in the future, in other colors.

Visit the Moku Huna website to learn more about them and order yours today!